Harrisburg – Senator Bob Mensch (R-24) was pleased to introduce and recognize the Cybersonics Technology Team 103 from Palisades High School during their visit to Harrisburg, Pennsylvania. The Cybersonics Technology Team 103, or Team 103, recently received the Gracious Professionalism Award and the Entrepreneurship Award during the FIRST (For Inspiration and Recognition of Science and Technology) World Championships in Detroit.

Team 103 is a non-profit, 501(c)(3) organization which inspires young people, their schools, and their communities to appreciate Science, Technology, Engineering, Art, and Mathematics (STEAM) education. The current Palisades High School Cybersonics Team has 32 team members and 5 parent mentors who support the team during the year with various activities, such as fundraisers and events; these mentors also help to run the business side of the team and construct and program the robot during the competition season. 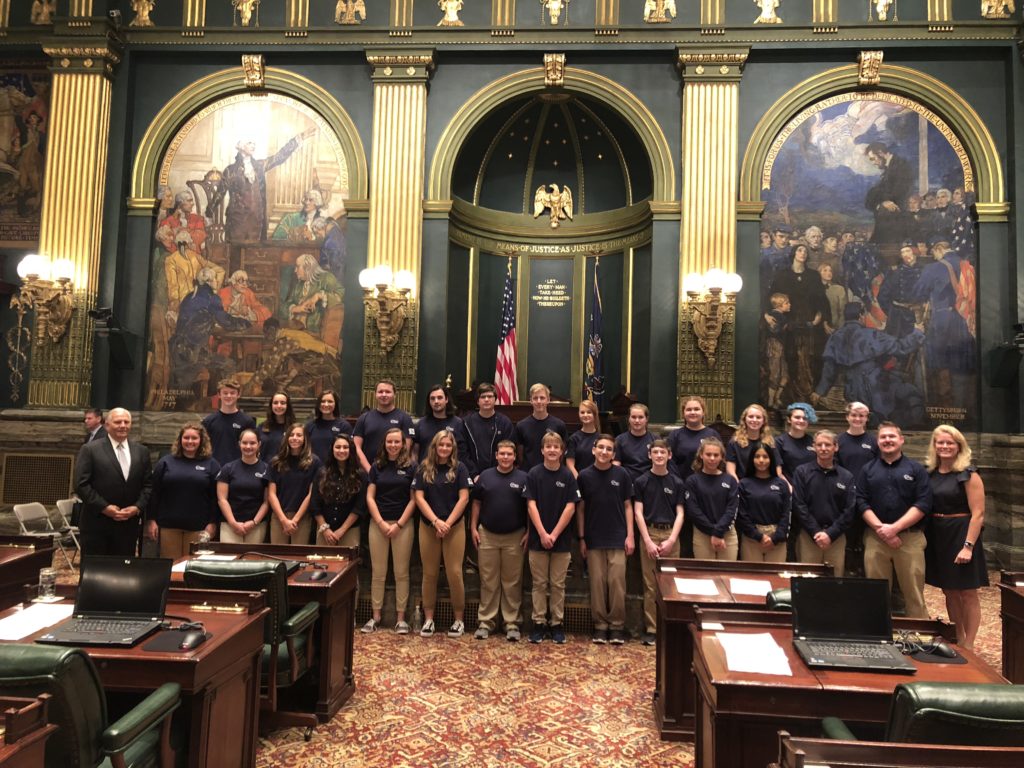 “It is my pleasure to recognize and congratulate the Cybersonics Technology Team 103 and their mentors on their well-deserved awards and recognition,” said Mensch. “This is an incredible organization that enables students to learn more about STEAM education and helps them realize how it can enrich their lives. The students are obtaining experience and education that will gear them towards a job market that is vital to our economy.”

Over the past twenty years, Team 103 has achieved a number of awards and received a myriad of recognitions. The team is a proud recipient of the Chairman’s Award in 2004, given by Mr. Dean Kamen, the founder of FIRST.  It is the highest honor given to a team by the FIRST Organization. Most recently, the team received the Gracious Professionalism Award the Entrepreneurship Award during the FIRST World Championships in Detroit.

The team began in 1997 at Palisades High School with two committed teachers, Mr. and Mrs. Beck, and a small but dedicated group of students and mentors. The team found a way to fund its inaugural FIRST season through a generous donation. Successfully preparing a robot for a competition and completing an animation entry were both a part of that initial year as well as attending regional competitions. Thus, the FIRST “bug” had bitten the Upper Bucks County, Pennsylvania school district.

Since it’s inception, Cybersonics has built and sustained lasting business and personal relationships with all of its valued community members. This includes mentors and students, corporate sponsors, local contributors, parents, and alumni.

Through these strong relationships, the team is able to foster a full circle experience, where former students gain internships and eventually jobs through businesses who have either developed connections or previously sponsored the team. Those students then return to mentor the current team. This creates an enormous network of STEAM driven companies, students, and mentors who help catapult Cybersonics and the community into the future.

Each year Team 103 raises over $50,000 to support their involvement in regional and national competitions.