Harrisburg – Legislation co-sponsored by Sen. Bob Mensch (R-24) that would help reduce the risk of patients falling victim to opioid addiction was approved Thursday by the Senate. 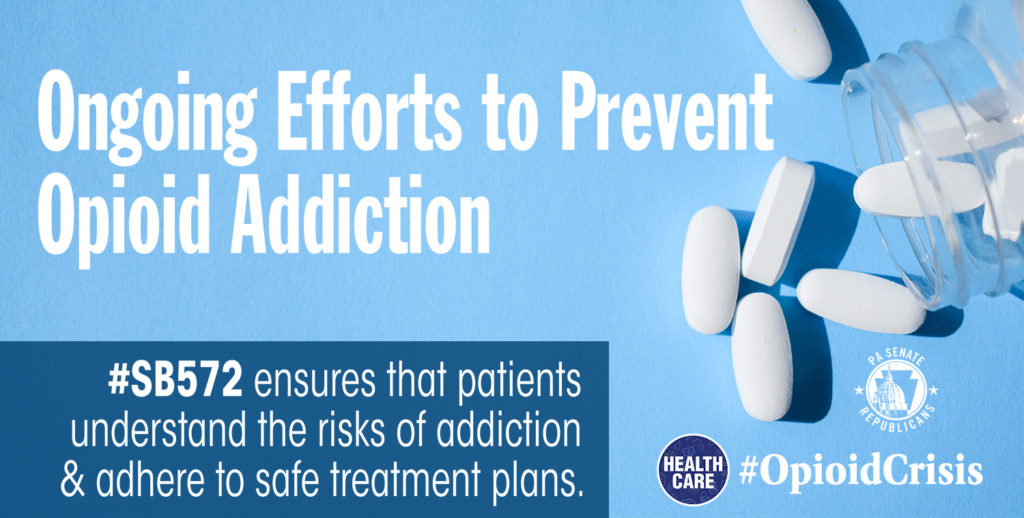 Senate Bill 572 would require new patients who need a prescribed opioid regimen to enter into treatment agreements with a prescriber to ensure that they adhere to safe, responsible guidelines for opioid use.

The treatment agreements would require new patients to undergo baseline and periodic drug testing to ensure they stick to the prescribed treatments and are not misusing or diverting prescriptions. The requirements would not apply in medical emergencies, to patients with existing relationships with a medical provider, or patients suffering from cancer or terminal illness.

The bill was part of a bipartisan package of reforms that the Senate approved in June to stem the tide of Pennsylvania’s heroin and opioid epidemic.

Senate Bill 572 was approved by both the Senate and the House of Representatives and was sent to the governor to be signed into law.

Today, Senators Randy Vulakovich (R-38) and Bob Mensch (R-24), the current and past Chairmen of the Senate Veterans Affairs & Emergency Preparedness Committee, introduced legislation that would increase oversight of the statewide radio project. Under Senate Bill 1157, the Auditor General would be required to audit and review issues related to the statewide radio system.

Originally created in 1996, the statewide radio system, (StarNet), was supposed to replace the state’s aging and incompatible systems with state-of-the art communications technology.  Now — more than 20 years later — problems remain in achieving interoperability of radio equipment among state and local agencies.  The State Police recently began a reboot of the project, implementing the first two phases of their P25 Pilot, which is a set of standards created through joint efforts with the Association of Public Safety Communications Officials (APCO) and is aimed at achieving interoperability amongst state and local agencies.

“Over the past two decades, numerous issues have arisen in regard to the statewide radio system and we intend to ensure that taxpayer dollars are being spent wisely in the future,” said Senator Vulakovich. “Having spent 27 years in law enforcement, I know the importance of interagency communications in emergencies.”

“StarNet has cost well over $700 million.” said Senator Mensch.  “We must get this system right and I believe it is essential that the Auditor General be a partner in the process to ensure that state resources are being used properly.”

Today’s action follows Senate passage two weeks ago of six measures to provide sweeping improvements to Pennsylvania’s child protection laws. The package was based on the recommendations of the Pennsylvania Task Force on Child Protection, created by the passage of Senate Resolution 250 in 2011.

The Senate approved the following bills today, all with unanimous votes:

Senate Bill 28, introduced by Senator Pat Browne (R-16), will lower the age of a perpetrator for simple assault from 21 to 18. This bill also expands the definition of aggravated assault to include:

Senate Bill 28 also will create the new offenses of “intimidation or retaliation in child abuse cases” and “false reports of child abuse” to help further protect the victims, witnesses and reporters of child abuse.

“This bill strengthens Pennsylvania’s child abuse laws by holding perpetrators accountable for their actions and by increasing the criminal penalties for any person who injures a child,” Senator Browne said. “In addition, this legislation creates the new offense of ‘intimidation’ or ‘retaliation’ in child abuse cases to protect the person filing the report on behalf of the abused child. These changes are important steps to increase the safety of Pennsylvania’s young people, fully prosecute those who prey on children and to protect those who have a responsibility to report cases of child abuse.”

Senate Bill 24, introduced by Senator Randy Vulakovich (R-40), will require the Department of Public Welfare to establish a secure, statewide database to include reports of child abuse and children in need of protective services.

“This database will act as a clearing house, allowing various agencies to more easily provide and share information,” said Senator Vulakovich. “The agencies will be able to more easily access information that may be currently missed when reviewing reports of suspected abuses cases. This will benefit law enforcement and social agencies and, especially, the children at risk for abuse.”

Senate Bill 29, introduced by Senator Pat Vance (R-31), will require health care providers to immediately report if a newborn is identified as being affected by prenatal exposure to illegal substances. Upon receipt of the report, the county agency shall perform an assessment and determine whether child protective services or general protective services are warranted.

“This legislation gives newborns who may be affected by illegal substances the opportunity for early treatment and a better chance for a healthy life,” said Senator Vance.

“When a child finally feels safe enough to tell someone about abuse, they often have to relive their experience multiple times, telling their story over and over to medical professionals, county agency investigators, law enforcement and prosecutors,” Senator Mensch said. “A multidisciplinary investigation reduces that trauma by allowing a team to coordinate with all the appropriate individuals in an investigation and subjecting the child to only one forensic interview that can be used throughout the investigation and prosecution of the alleged abuse. This speeds up the process of stopping the perpetrator and helps the child move forward.”

Senate Bill 31, co-sponsored by Senator Mike Folmer (R-48), will close a loophole. Currently, the law provides that if there is a case of suspected child abuse in which the alleged perpetrator is a school employee, there is no requirement to report that abuse unless it rises to the level of a “serious bodily injury.” The bill would amend the Child Protective Services Law to eliminate what is now a separate system for reporting abuse by school employees.

Harrisburg – The Alzheimer’s Association Delaware Valley Chapter and State Senator Bob Mensch (R-24) will hold a town hall meeting to solicit comments and perspectives from stakeholders in the community on what is needed to support people in Pennsylvania who are affected by Alzheimer’s disease and related disorders.  This Town Hall will be held on October 17, from 1p.m.-2:30p.m. at St. Luke’s Quakertown Hospital-Taylor Conference Room located at 1021 Park Avenue, Quakertown, PA 18951.

Pennsylvania area residents, including those who live with Alzheimer’s disease or related disorders, their caregivers, representatives from federal, state and local government, the research community, health systems and long-term care facilities are invited to come and share their thoughts about what elements need to be included in a comprehensive Pennsylvania State Plan.

The Committee will look at needs and research trends, study existing resources and formulate an effective response strategy to the rising number of those affected by the disease.  The Committee is comprised of 26 members from various geographic regions of the Commonwealth, including state policy leaders, legislators, leaders in research and advocacy and those personally affected by Alzheimer’s disease.