Harrisburg – Senator Bob Mensch (R-24) joined the Pottstown Branch of the NAACP (#2288) and members of the community on May 4, 2019 at the intersection of Route 100, King Street, and Shoemaker Road in Pottstown, Pennsylvania to unveil a sign recognizing Mr. Newstell Marable, Sr.

Senator Mensch introduced legislation on behalf of the Pottstown Branch of the NAACP (#2288), now Act 161 of 2018, which designates the bridge on a portion of Pennsylvania Route 100 over the Schuylkill River in Pottstown Borough, Montgomery County, as the Newstell Marable, Sr., Memorial Bridge.

“I’m honored to help recognize Mr. Newstell Marable, Sr., who was an outstanding community leader and advocate,” said Mensch.  “Mr. Marable was an exemplary citizen who went above and beyond to help unite his community.  The bridge naming will be a daily reminder to everyone about his remarkable contributions to society.” 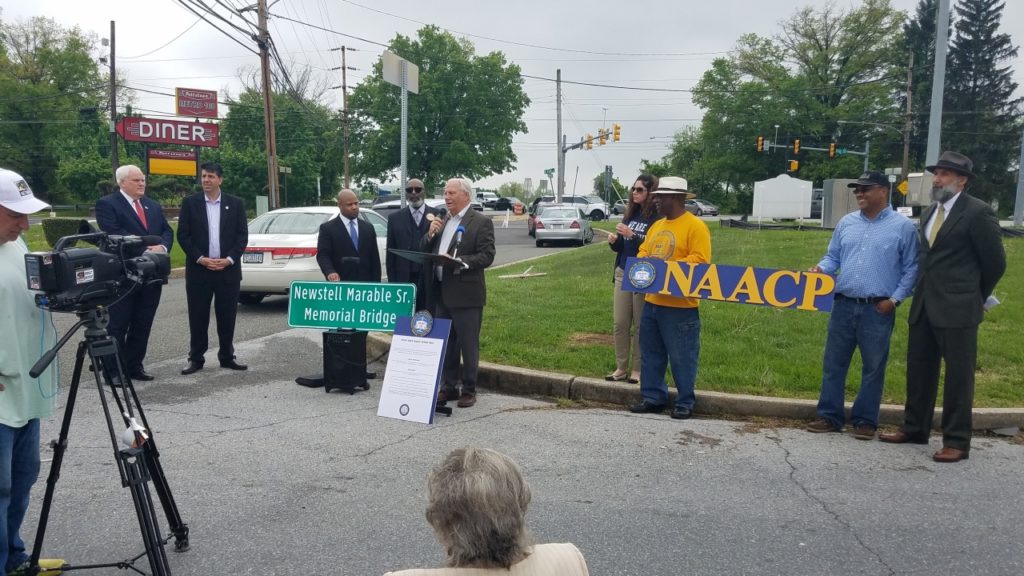 Mr. Newstell Marable, Sr., was a native of Birmingham, Alabama, and a graduate of Alabama A&M University.  He served in the United States Army from 1953 through 1955.

Mr. Marable was a passionate advocate for equal opportunity and employment for all races and genders. In 1985, Mr. Marable led the combined efforts of the NAACP and many churches and organizations to fight for the rightful employment of two African Americans to the local fire company.

Mr. Marable was a key advocate for equality and was instrumental in closing the Boyertown School District and Pottsgrove School District for observance of the Martin Luther King, Jr., holiday celebrations. He was a proud and longstanding member of the Bethel A.M.E. Church in Pottstown, where he served on multiple boards and held many positions.

Per Act 161 of 2018, the bridge on that portion of Pennsylvania Route 100 over the Schuylkill River in Pottstown Borough, Montgomery County, is designated as the Newstell Marable, Sr., Memorial Bridge.